On the occasion of International Women's Day 2022: an interview with our member Marita Lintener

Skyguide is responsible for Switzerland's air traffic control. And on today's International Women's Day, Skyguide is demonstrating that women play a prominent role in aviation, which is still dominated by men. On International Women's Day, for example, Swiss airspace is predominantly managed by female air traffic controllers. Skyguide has been promoting diversity as a key part of its corporate strategy for about 10 years.

The magazine "Ladies Drive", which is also available on newsstands in the DACH region, currently profiles the women of Skyguide - including our member Marita Lintener. We quote this part of the publication here.

In conversation with Marita Lintener (Head of International Affairs, Skyguide)

Could you please briefly introduce yourself in 2-3 sentences, your function and how you came to it?
"After more than 30 years in the aviation industry, I joined Skyguide at the beginning of 2021 as Head of International Affairs. Previously, I worked with all industry partners along the value chain, both for the major airlines in Europe and with the public sector, e.g. the European Commission, in SESAR and with international agencies. Originally, I started my career at Lufthansa Airlines, after having obtained my Master's degree in Economics. As part of my pro bono activities, I am currently a member of the board of the International Aviation Women's Association (IAWA) as VP Europe & Africa and was awarded as "EU Diversity Ambassador" by the EU Commissioner for Transport in 2019. I am a mother of two grown-up children, a daughter and a son.

Before skyguide, you held various positions in aviation at the European level. Aviation is known to be quite male-dominated. Did you encounter any resistance because you are a woman?
I've actually never encountered any particular resistance based on gender. Fortunately, I have a number of male and female supporters who have been supportive of my career path and personal development. However, I soon realized that there were fewer and fewer women at the table as you move up the career ladder. And I noticed that this was hardly questioned by the male part of the management teams, but seen as `normal`. I would describe it more as an unconscious bias on the part of many men, who have happily become accustomed to the way things are and to male-dominated structures. Fortunately, this is slowly changing and it is widely recognized that diverse teams are more successful.

What do you think are the obstacles and barriers to achieving gender equality?
There are a variety of reasons. Because aviation and air traffic management are more technical fields, fewer women seem to have entered the sector in the past. To fill the pipeline, our industry needs all the talent it can get, and as part of that activity, we need to get girls excited about aerospace. We need to encourage interest in STEM subjects (science, technology, engineering, math). Role models play a crucial role here! And later, companies need to proactively retain women and develop their careers once they are on board. Women are more likely than men to consider leaving the sector and are more likely to be displaced by negative experiences than attracted by new opportunities.

How can women overcome power structures?
It's not about "correcting women" on how to better deal with traditionally male power structures. We need to change the way we work together, and that includes all leaders in a company. Recruiting the best talent, providing mid-career support, and encouraging advancement to senior positions must go hand-in-hand to build a culture that is intentionally inclusive of women. Providing flexible work structures for men and women at the stage in their careers when women tend to leave (when they have children) to encourage them to stay involved. As a navigational guide for women, I would recommend: Connect, Inspire and Lead.

If you could have dinner with one inspiring woman, dead or alive, who would it be and why?
There is another sector where there are traditionally very few women, and that is the financial sector. I would love to have dinner with Ms. Christine Lagarde, the president of the European Central Bank. She has made her way through male-dominated politics in France, served at the top level of the IMF in the U.S., and is now at the helm of the ECB in Frankfurt. She is a strong advocate for gender balance and regularly meets with local women's delegations on her business trips around the world. I'm curious to hear what she has to say about how best to advance gender equality and diversity now that it's finally becoming a reality." 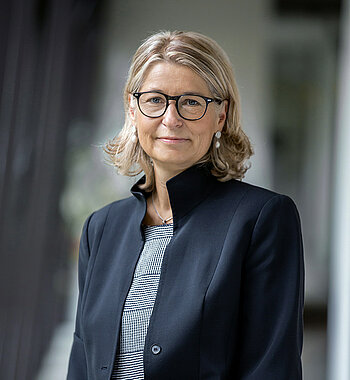 With more than 30 years of management experience, Marita has built up a strong global reputation in the transport, aviation & aerospace sector and acquired skills that are transferable to any other industry. She has worked with all industry partners along the value chain, from Lufthansa and other major airlines to the European Commission, international agencies and public-private partnerships.